Ready “Then Jesus cried out, ‘… I have come as a light into the world, so that everyone who believes in Me would not remain in darkness.’” – John 12:44a, 46
Set

The story of Texas Rangers' outfielder Josh Hamilton has been well-chronicled. Major League Baseball’s first overall draft pick in 1999, his career and future was derailed by drug and alcohol addiction beginning in 2003. In his own words, he hit rock-bottom on Oct. 5, 2005 when he stood on his grandmother’s porch, having nowhere else to turn after going on a drug binge. She took him in and under her care Hamilton’s heart was opened to God’s love and how much he needed Him to heal the brokenness in his life.

It wasn’t an overnight turnaround story, but slowly, with his faith being at the center, the Lord began to restore his life, even giving him a second chance in baseball. In 2007, Hamilton returned to the big leagues and his baseball career blossomed, being named an All-Star five times and winning the 2010 American League MVP award along with many other awards and accomplishments. Through it all, Hamilton’s sole focus has been to bring God the glory, knowing that without His grace and forgiveness through the sacrificial death and resurrection of His Son, Jesus Christ, he wouldn’t be where he is today.

The Rangers’ slugger recently sat down with FCA to talk about how the Lord has helped him overcome addiction, given him a second chance in life and baseball, and a purpose for playing the game. Click below to watch the video, then take a few minutes to answer the questions and read the related Scripture. 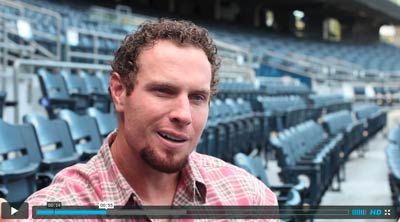