The Race That Lies Before Us

Ready “Therefore, since we also have such a large cloud of witnesses surrounding us, let us lay aside every weight and the sin that so easily ensnares us. Let us run with endurance the race that lies before us, keeping our eyes on Jesus, the source and perfecter of our faith, who for the joy that lay before Him endured a cross and despised the shame and has sat down at the right hand of God’s throne.” – Hebrews 12:1-2
Set

When Matt Barkley decided to attend and play football at the University of Southern California, visions of conference and national championships surely ran through his mind. But rather than seeing those dreams become reality, he was instead thrust into the role of the man who would lead the cardinal and gold through the darkness of NCAA sanctions. Given the opportunity to transfer or pursue NFL stardom, Barkley instead chose to remain at Southern Cal and now, in the midst of his senior season, he’s rewriting the Pac-12 Conference and Trojan record books.

Throughout his career, Barkley has been fully aware of the “cloud of witnesses” who have been tracking his every move, and just as his favorite Bible verse, Hebrews 12:1-2 instructs, he has laid all distractions aside and focused on the race God has placed before him. He’s run that race with the sole purpose of bringing glory to God – a goal of his since he began his relationship with Christ in elementary school and developed it further at Mater Dei High School in Santa Ana, Calif., where he led the charge to bring FCA to campus.

The senior signal caller recently sat down with FCA to talk about his passion for the Trojans, his relationship with the Lord, and how he has seen God’s divine plan for his life play out while at Southern Cal. Click below to watch the video, then take a few minutes to answer the questions and read the related Scripture. 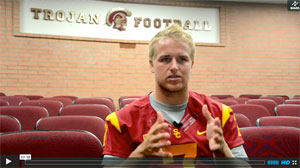 Go 1. How do you see your life and athletic career reflected in Matt Barkley’s? 2. How has your relationship with Christ allowed you to let go of your plans and let God orchestrate His plan for your life? 3. Who could you share your faith story with today that could leave an everlasting impact for Christ?
Workout Psalm 28:7 Jeremiah 29:11-13 1 Timothy 6:11-16
Sport
Football
By FCA Resources October 26, 2012