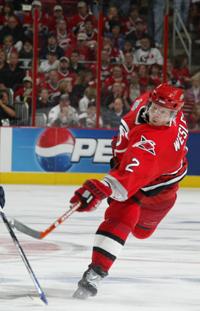 Offense wins games, defense wins championships. Every athlete and coach has heard and probably used this phrase. But that doesn’t change the fact that a productive offense generally overshadows defensive success. Both fans and media tend to focus on one thing: points scored. But after the Carolina Hurricanes’ final rally in game seven of the 2006 Stanley Cup Finals, no one could deny the defensive presence. After all, it was the perseverance and calm leadership of blueliner Glen Wesley that helped clinch the win and allowed him to finally raise the Stanley Cup – something he’d waited 18 years to do.