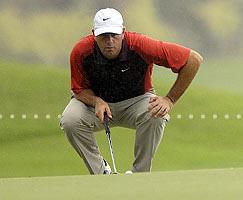 It was once thought that shorter men made the best golfers. But that turned out to be a myth, facilitated only by the fact that the best players at the time were under 5-foot-11.

Stewart Cink is 6-foot-4, 205 lbs.—impressive stature compared to those tour champions of the past, and tall enough to set him above the tour leaders of the moment as well, but only by an inch or two.  But those who know Stewart Cink wouldn’t likely reference his measurements as what separates him from the crowd. Because more impressive than his physical presence is his spiritual stature, which is created by the manifestation of the Holy Spirit inside him.