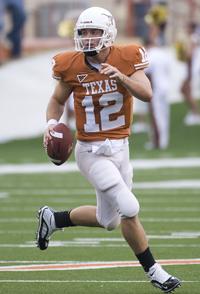 The Heart of Texas

Brad McCoy has a favorite story to tell about his son Colt. It’s one that makes him more proud of his oldest boy than any touchdown pass ever could. Three years ago, Brad received a phone call on a Sunday afternoon from a man who had taken his 7-year-old son to church in Austin, Texas, earlier that morning. The man and his boy had taken seats directly behind Colt on the morning after the University of Texas quarterback had been injured in a road loss to Kansas State. Despite a trip to the hospital that revealed a pinched nerve in Colt’s neck and a late return to Austin, Colt was still in church at 8 a.m. for worship.