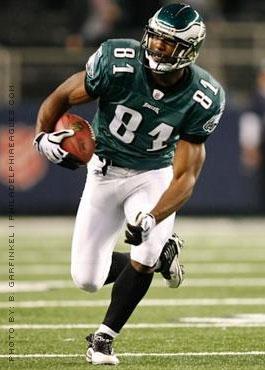 Jason Avant knows a thing or two about conversions.
Last year, the Philadelphia Eagle wide receiver set a career high in receptions (41), averaging over 14 yards per catch. Nearly two-thirds of those catches went for a first down.
During his four year career, the Chicago native and ex-Michigan Wolverine has caught 37 balls on third down. A remarkable 32 of them- 87%- were converted into first downs.
Avant does not have the cartoonish speed of teammate DeSean Jackson (then again, does anybody?). Nor does he have a 255 pound frame like Eagle tight end Brent Celek.
Instead, Avant is gifted with the great hands, smarts and toughness needed to play slot receiver. He has the ability to get open over the middle, take a vicious lick, and still convert a pass into a first down again…and again…and again.
So Jason Avant knows a thing or two about conversions. Converting a pass into a first down. And more importantly, converting a life into a vessel used to glorify his Lord and Savior, Jesus Christ.