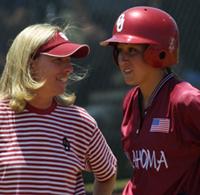 The empty beer cans and litter strewn across the field were the least of Patty Gasso’s concerns. When Gasso took over as the University of Oklahoma’s softball coach in October 1994, the program was in disarray. Her predecessor had been acting on an interim basis because the previous coach had resigned for health concerns. Some players rebelled, skipping the fall training period because they had wanted an assistant coach to get the head job.