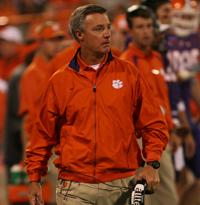 Under Pressure, Above Reproach

The locusts come every 17 years.

For Tommy Bowden, this bizarre phenomenon of nature remains a vivid memory from his days in West Virginia. Bobby Bowden, Tommy’s coaching-legend father, had moved the family from Alabama to Morgantown when he became the Mountaineers’ head football coach in 1970. Tommy, who played as a walk-on wide receiver for the Mountaineers from 1973 to ’76, still recalls the peculiar insects, with their freaky red eyes, thick black bodies and incessant drone. Every 17 years, they would crawl out of the ground by the millions to mate, spawn and die, all within several weeks.