"Brothers, I do not consider myself yet to have taken hold of it. But one thing I do: Forgetting what is behind and straining toward what is ahead, I press on toward the goal to win the prize for which God has called me heavenward in Christ Jesus."
-Philippians 3:13-14

It’s hard to simplify life. Narrowing the focus seems impossible. Over this past year, you may have been asked hundreds of times, “How is it going?” Your response was probably something like, “I have been SO busy!” You never hear someone say, “I’ve had so much time on my hands, and I’m looking for something new to do.” That person doesn’t exist.

As an athlete or coach, you have tons of responsibilities, and your schedule is crazy. You feel like you are sprinting on the field and also sprinting in life. That is why we need to be intentional about clarifying and simplifying life. For the past fifteen years, we have been sharing with many people the simple discipline of developing just one word as a theme for the upcoming year. That is right, just One Word. We decided to stop listing the resolutions and start living One Word. And it has become catalytic.

In the movie, “City Slickers,” there is a scene that reveals the value and magnitude of one thing. Billy Crystal plays Mitch, a vacationing businessman who, along with two friends, takes on the adventure of a cattle drive. In the middle of the drive, a rough-necked cowhand named Curly tells Mitch that the secret to life is just one thing. Curly emphasizes the point by holding one finger up and saying, "You need to stick to that one thing." To this, Mitch replies, "What is that one thing?" Curly responds back, "That is what you gotta figure out."

Curly is not a Bible scholar, but he does recognize the power of just one thing. Even though the Bible does not have the phrase " One Word theme," it is interesting to note that the phrase "one thing" appears five times in the Bible: once in Philippians and four times in the Gospels.

In Philippians 3:13-14, Paul uses the phrase "one thing" to bring focus and clarity to his calling. In Luke 10:42, Jesus says to Martha, "only one thing is needed." Both Luke 18:22 and Mark 10:21 include His words to the rich man and express a lack of "one thing." John 9:25 also includes this phrase as the blind man tells the Pharisees, "One thing I do know. I was blind but now I see!" In the same way that Scripture uses these words, we also can put it to use by asking God to reveal a One Word theme for us this year.

When we first started this process, half of the fun was choosing the word for the year, but we have learned that it is not necessarily us who chooses the word, but rather God who reveals it to us. God can, indeed, drop an anointed, specific word into your soul. In our first few years, we admit that it was 99 percent us picking the word and one percent God speaking. Even so, God still used it! But as we became more experienced in the process, we learned to really listen and watch for God's leading in selecting the word. You want a God-word, not just a good-word.

Every day, you'll be blessed as you experience God revealing to you powerful truths about your One Word theme. Everywhere you turn, there will be new insights and valuable lessons associated with that word.

Enjoy the process and remember: just One Word. Not a phrase. Not even two words. Narrow the focus for life change. Just One Word

"Dear Heavenly Father, I am asking for just One Word for the year. I want a word from You. Please reveal Yourself to me. I am ready to receive the word meant for me. In Jesus’ name, amen." 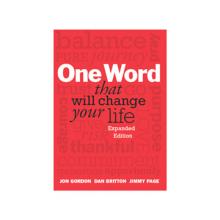