According to the grace given to us, we have different gifts: If prophecy, use it according to the standard of one’s faith; if service, in service; if teaching, in teaching; if exhorting, in exhortation; giving, with generosity; leading, with diligence; showing mercy, with cheerfulness. Romans 12:6-8

I’ve been blessed to accomplish some amazing feats that only a handful of female basketball players have achieved. During my career, I’ve been honored to play on an NCAA National Championship team, a WNBA Championship team and an Olympic gold medal team. At Notre Dame, I hit the game-winning shot and was voted the 2001 Final Four’s Most Outstanding Player. With the Detroit Shock, I was named the 2003 WNBA Finals MVP.

At the 2004 Olympics in Greece, however, I had a completely different experience. I was the twelfth and final player chosen for the U.S. Team. I knew going into the competition that I would not be a significant contributor, but I was nonetheless determined to prepare for whatever I was asked to do. Every day in practice I had the opportunity to guard Lisa Leslie, one of the best players in the world. And that was my role.

In Romans 12:6-8, the apostle Paul teaches us that we all have God-given gifts, and we are called to use those gifts for His purpose. This is true for all competitors, and it’s true for all aspects of our life. As athletes, it might be the difference between leading the team and providing support from the bench. As Christians, it might be the difference between speaking publicly from a platform and serving others anonymously. But no matter what our role of responsibility might be, it’s important that we remember to play with purpose, live our lives with humility and desire to make a difference through the love of Christ.

1. What role do you currently play on your sports team? Are you satisfied with that role? Explain.

2. What do you think it means to “play with purpose”?

3. What can you start doing today that will allow you to embrace that principle?

Lord, I want to play with purpose. I want to embrace my role and embrace the gifts and abilities with which You have blessed me. Help me transfer this principle beyond the field of competition and into every aspect of my life. Amen.

Heart of a Competitor 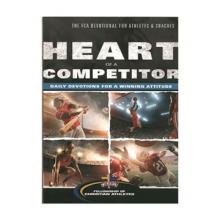