One summer at FCA Captain’s Camp, high school athletes were pushed to their mental, physical, emotional, and spiritual limits. Thankfully, my job was simple – I was the “Waterboy”.

When I was a high school athlete, waterboys were often treated as the “least” important part of the team. They did the job no one else wanted to do. But Jesus never views those who play a seemingly “small” role as unimportant. He never looked down on those who served behind the scenes or did the jobs nobody else wanted. In fact, Jesus flips that concept on its head. He says the least among us will be the greatest. Those we consider great – the best players, the best coaches – will only be considered great in God’s eyes if they serve like the Waterboy serves.

In Mark 9:33-37, the disciples were arguing with each other about who was the greatest. We are often just like the disciples. We want to be great. We want to have all the attention. So Jesus called them all over and confronted them saying, “if anyone wants to be first, he must be the very last, and the servant of all.” Wow. Convicting, right? Jesus came to serve out of the position of humility, not to sit in the place of honor. He didn’t seek status – he served. Those we think are least important, God considers the most important.

When’s the last time you heard someone say they want to be “the least”? That’s what Jesus became – the least. He served us and continues to serve us. Serving out of humility produces greatness. There is no other road to greatness. If you want to be great, you have to serve.

Father, thank you for modeling what it looks like to serve out of humility. Help me to find specific ways to serve those around me. Amen. 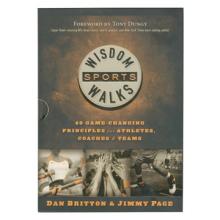