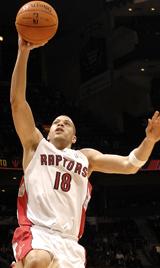 There’s not much about Anthony Parker that isn’t unique. Among NBA starters, he’s probably the only one who can rattle off useful phrases in Hebrew — something he picked up while dominating the European League from 2000-2006. He’s also the only playoff-caliber shooting guard who really does have the potential to be shown up on the court by his little sister. (He refers to little sis, All-American Candace Parker, as the Parker.) And he may be the only person who can read or owns a TV who’ll defend the good reputation of the NBA.