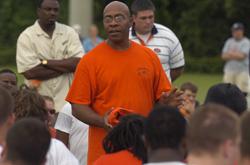 As a hardened 19-year-old, FCA’s Chette Williams found hitting rock bottom a shattering experience. After previously committing himself to three goals — get a college degree, play football and make Mama proud — being told by the Auburn football coach, “You’re a problem ... It’s time for you to move on,” left Williams seemingly with nothing left to live for. With nowhere else to turn, Williams opened his Bible.

Now, 23 years after he last suited up for the Tigers, Williams is serving as chaplain of the Auburn football team while working as both the school’s FCA campus director and the state of Alabama’s director for urban ministries.