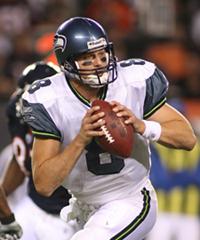 What Matters to Matt

Matt Hasselbeck is famous for a lot of reasons. Most people know him as a three-time Pro Bowl selection and the Super Bowl XL quarterback of the Seattle Seahawks. Some associate him with his father, Don, who played nine seasons in the NFL. The less-football-savvy crowd knows him for his TV star sister-in-law, Elisabeth, from ABC’s “The View.” And a growing number of people are getting to know him for his dancing skills. (Thank you, Reebok!)

Regardless of what category you place him in, however, there’s one thing about Matt Hasselbeck that can’t be separated from his inner athlete, son, dancer or field general: his faith in Jesus Christ.