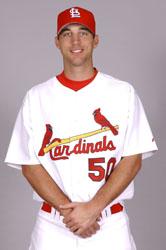 Standing tall at 6’ 7”, Adam Wainwright is an intimidating figure — something that certainly plays to his advantage as a Major League pitcher. But get him talking about his daughter, and you’d never know that the 25-year-old makes a living paralyzing big-league sluggers with his breaking curveball. In fact, when talking about little Baylie Grace, Wainwright barely resembles the man who struck out Detroit’s Brandon Inge for the final out of the 2006 World Series, giving the St. Louis Cardinals their first World Championship since 1982.